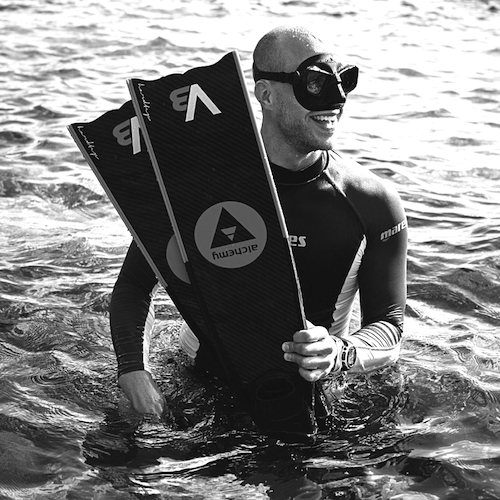 Since he left his former job as an Automotive-Event-Manager, Timo Niessner turned his life upside down.Switching from scuba to freedive instructor, he managed to widen his for the beauty of melting into the blue in just one breath. This experienced pushed him forward to combine the mental challenge under water with his practice as personal and business coach.  For the past years Timo Niessner supports Premier League Clubs, international companies and people who want to master their limits with freediving. His new journey lets him travel all over the world to work, get inspired, freedive and create high-end content with his team for multiple Companies.

In 2017 he launched the video project in cooperation with Alchemy to show another more spiritual and philosophical site of freediving. His goal was to break down freediving to its pure core. Naked, blue, deep and one with the world around us. One year later he released two more video projects.Upside Down, a documentary about how he turned his life upside down with freediving. Later in the year the Mercedes-Benz spot for the new X-Class Beyond The Beaten Path went viral via all international Mercedes-Benz channels and reached more than 35M views.

Till now he is always up for new challenges, inspirations wherever he travels and the pure bliss of melting into the blue.