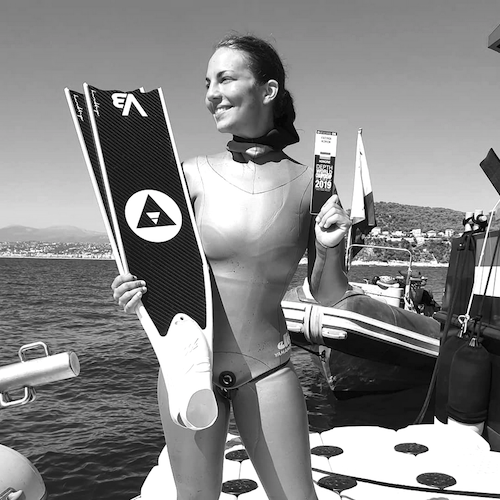 Fatima is the first Hungarian world champion in freediving. She won a gold medal in FIM discipline on the AIDA Depth World Championship in 2019 and did 8 NRs for Hungary during the 11 months being in the sport.

Since the age of 16 Fatima was working in the tourism industry in Budapest, first as a sales person and then as a cultural project manager and tour guide. In 2016 she decided to change her life and travel, ever since she lost 40kgs, worked in Spain with kids in hotels and she was traveling in Central America to be a scuba professional. In Honduras she decided to sign up for a freediving beginner course at Freedive Utila and she fell in love with deep diving. Fatima decided to dedicate herself to breath hold diving and moved to Dahab in October 2018. During the 8 months training in Egyt she did a quick progression to 80m, participated 4 competitions in the Blue Hole and became an AIDA instructor.

Fatima is competing in all depth disciplines, but her favorite is CWNF, she is planning to be based in Dahab and Croatia and doing workshops all over the world. In the future Fatima wants to continue to compete in depth and make freediving more popular especially for younger generations.