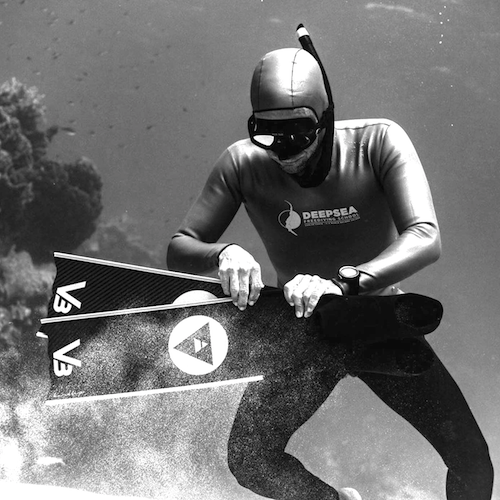 Legendary world class freediver and multiple world record-holder. Carlos discover apnea diving in 1997. His first years learning freediving were in Venezuela, where he started a very intense and passionate exploration journey of his potential in breath hold diving. It was a very self-taught start, since in Venezuela (1996-1999) the knowledge about freediving was extremely limited. But his curiosity and passion push him to discover techniques and experiment it, being able to reach 60m depths in less than 3 years without any international learning experience. Carlos started in the University Underwater Activities Club (CASA-UCV, Caracas) where he learned the fundamentals and became part of a community of spearfishermen and sport divers. Coste start training in parallel Spearfishing & Freediving every week.

In 2000 Carlos participate in his 1st International Freediving Competition (Niza Freediving TEAM World Cup) where the Venezuelan TEAM won the Bronze, between 29 countries. It meant a huge push to Carlos ́s motivation.

From this point, Coste ́s career kick off, becoming a pioneer being the first freediver passing the 100m barrier in non-assisted disciplines (CWT and FIM), as well he challenging himself going beyond standards, breaking records in Altitude and Caves.

During a -182m depth training dive in September 2006 in No Limits discipline Carlos had a serious accident (air embolism in the cerebellum). He completed the 182m dive training to break the NLT WR at that moment (183m) reach surface, surface protocol OK, but start to feel strong symptoms. Carlos did a very intense recovery treatment including Hyperbaric Medicine and physiotherapy / training for months that allow him to get back into the competitive & WR arena. His recovery was not an individual work, it was a TEAM effort leaded by Gaby (Carlos ́s ex-wife) during those difficult times.

From 2007 Carlos re start his competitive career, having new WR and adventures. From 2014 is living in Bonaire, Dutch Caribbean where he and Gaby founded Deepsea Freediving School (www.deepseabonaire.com). From then is teaching a lot of students that visit him to learn from his freediving experience & techniques.