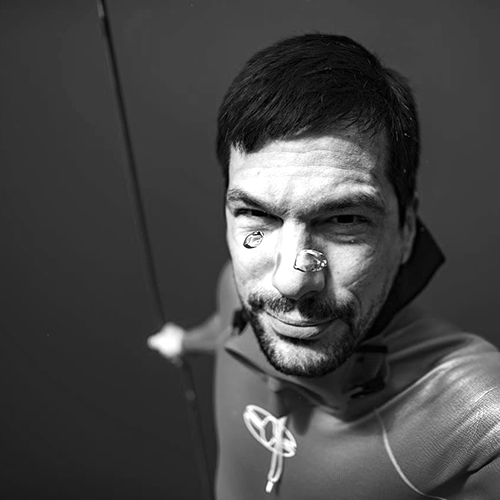 You wouldn't necessarily have thought that a kid who's afraid of water, and later tried to get into photography college and failed, would become a professional freediving cameraman, yet that is what happened to Daan Verhoeven. As the child of two teachers who had no natural affinity for water, he was phobic for anything deeper than a half-filled bath tub. It wasn't till his step-father took him on his back and pushed off the side of the pool that Daan understood the thrill of water rushing by. Soon, he spent most of his vacations in and below the water. He took up competitive swimming for a brief while, but laps on the surface were not really his thing; he'd rather play underneath it.

After high school, when it became clear he wouldn't become a professional basketball player due to two busted knees and one lack of talent, Daan tried to get into photography college, thinking he'd learn how to shape the ideas he had, and how to capture the beauty he saw everywhere around him. Problem was, his talent for doing so was, again, limited, and his portfolio rather shambolic. The kind advisor at the college gently told him he'd probably be better off elsewhere. So he worked for a year and then had a dream about New York, so he went there to study communication arts. He did well enough to get a scholarship, and got a bachelor degree in 3 years.

He then worked in publishing for a while, overseeing his philosopher father's legacy of over 3700 written publications, when the underwater world caught up with him again on a scuba trip in Egypt in 2004. He snorkelled quite a bit deeper than the divemasters were comfortable with. Turns out this was a sport called freediving, and it rekindled Daan's love for water. Soon he started freediving competitively and traveling, and needed a way to tell his worried mother he was alright, so he got a cellphone. The little thing had a tiny camera, and playing with it, Daan remembered how fun that was. So he borrowed a slightly better compact camera. Then a somewhat better one still. Then a friend let him use her professional camera, and convinced him to get one. He did not put that camera down much the next 3 years, and started selling his photography after a while.

It wasn't till 2011 that both passions combined, when a friend lend him a DSLR in an aluminium housing and he took his first real underwater photo – the moment that camera clicked, so did something inside him, and he knew he was an underwater photographer. So he worked hard, saving up for half a year to buy a camera, and borrowed the rest to get a housing. It took 2 years of doing as many gigs as he could while working his regular job at the same time, to become a full time underwater cameraman in 2014. Since 2012, he's covered most major freediving competitions, and has been published in the New York Times, Bild, Paris Match, The Guardian and many other publications. His films have appeared on Red Bull, World Sport, ITV, BBC, and his youtube videos have had millions of views.