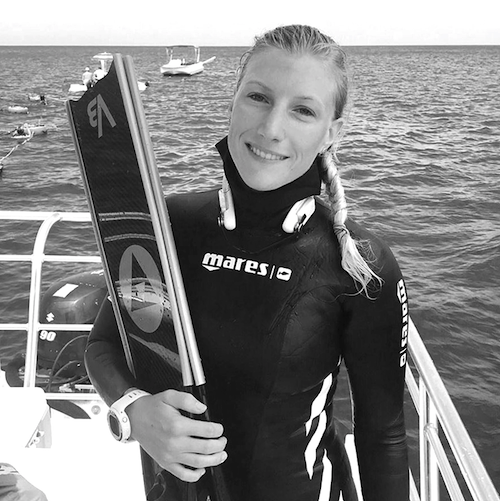 Neža is a Slovenian freediver, who started freediving in 2016. She is currently sharing a national record with Alenka Artnik in free-immersion discipline and she broke a national static apnea record in 2019. Even though the majority of her year is spent training in the pool, she genuinely loves depth diving. She is working full time as a product manager for Celtra and together with her husband Samo Jeranko, she is building an ever-growing community of freedivers in Slovenia in the scope of their freediving club Apnea.si.

Neža grew up doing a lot of different sports, but the main one was alpine skiing which she trained for more than a decade. She spent a lot of time each summer on a motorboat with her family, where she fell in love with snorkeling and exploring the sea. Naturally, whenever something was dropped in the water, she was called in for a rescue, so she dove for cutlery,  her brother’s fins, paddles, and an occasional detangling of anchor chains. Needless to say, she loved every one of those challenges.

Later on, during her college years, Neža followed her high school friend Samo Jeranko on Facebook, who was already breaking Slovenian national records. Intrigued, she invited him for a coffee, which turned into a relationship and a joined love for freediving. In her first year, she enjoyed some major successes, when she managed to dive to a depth of 65m with a monofin after just a couple of months of training and doing a 60m free-immersion dive on her only second dive in free-immersion discipline ever.

That same year, in 2016, Samo decided to quit his regular job and turn his attention to his Apnea.si freediving club. With her broad knowledge of building websites, content writing, and online advertising, Neža built a new website and showed him how to grow his business online. In the meantime, she kept training and ran into her first obstacles: lack of proper swimming technique for the pool freediving and lack of time to break her plateau with equalization for depth freediving. She kept training relentlessly and among other achievements, she broke Slovenian national record in static apnea with a time of 5:48 and equaled Alenka Artnik’s national record in free immersion with a dive of 75m.

There is still a lot she plans to work on in the years to come. The freediving business still has a lot of room to grow and the sea is calling her to spend more time on depth training. All in all, there is a lot left to explore in this amazing world of freediving!