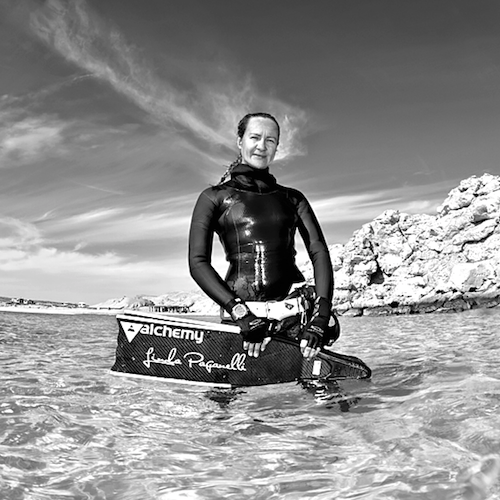 Linda started freediving in 2002 but only got into competitive freediving in 2005 when she set her first italian records in all 3 depth disciplines, Constant Weight, Free Immersion and Constant No Fins. She held most of the depth records (cwt, fim, cnf, variable weight) for Italy for over 1 decade from 2005 until 2016, and set a Continental Record in Variable Weight in 2007.

She has been teaching freediving since 2004 and became an Instructor Trainer in 2007, taught hundreds of instructor courses for a decade. She coached hundreds of competitive freedivers and continues to do so to this day. When she stopped training and competing she became passionate about underwater photography and she always has her camera in the water with her.

She lived in Dahab, Egypt from 2002 to 2015, where she could train all year round while running her school, Freedive Dahab. In 2016 she moved to Tenerife (Canary Islands, Spain) where she started another freediving center, Atlantis Freediving.